New Year’s Eve is tomorrow, so it’s time to make some resolutions!  Mine is to lose weight, as most people tend to do, except my weight is going to be coming off of my TBR pile lol.

I have several goals for this year involving my bookish habits.  These include:

It’s not much but it’s enough for me.

What bookish goals do you have for the New Year?

It’s that time again!  Happy New Year’s everyone!  I’ve already done my anticipated reads post for 2018, now it’s time to reflect on the books that I absolutely loved reading this year.  I read a total of 76 books, so there were a lot to choose from!  Most of these are releases from 2017, but some were not.  Some were middle grade books.  Most were YA.  Anyway, in no particular order at all, here are my favorite reads of 2017!  (I tried to do 17 books, but I couldn’t push it down past 18.  So, one for good luck, or something). END_OF_DOCUMENT_TOKEN_TO_BE_REPLACED

When Earth intercepts a message from a long-extinct alien race, it seems like the solution the planet has been waiting for. The Undying’s advanced technology has the potential to undo environmental damage and turn lives around, and Gaia, their former home planet, is a treasure trove waiting to be uncovered.

For Jules Addison and his fellow scholars, the discovery of an alien culture offers unprecedented opportunity for study… as long as scavengers like Amelia Radcliffe don’t loot everything first. Mia and Jules’ different reasons for smuggling themselves onto Gaia put them immediately at odds, but after escaping a dangerous confrontation with other scavvers, they form a fragile alliance.

In order to penetrate the Undying temple and reach the tech and information hidden within, the two must decode the ancient race’s secrets and survive their traps. But the more they learn about the Undying, the more their presence in the temple seems to be part of a grand design that could spell the end of the human race…

I went into this book with high hopes. Having read Illuminae by Amie Kauffman and Jay Kristoff, and having an absolute love for Indiana Jones, I thought that I would enjoy this book immensely. And while the beginning of the book dropped me into the story so quickly I thought that it would be a non-stop adventure that I would love, sadly it was not to be so. END_OF_DOCUMENT_TOKEN_TO_BE_REPLACED 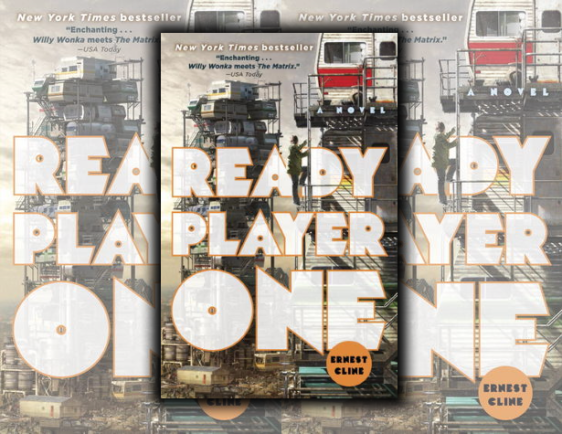 Ready Player One, by Ernest Cline

In the year 2044, reality is an ugly place. The only time teenage Wade Watts really feels alive is when he’s jacked into the virtual utopia known as the OASIS. Wade’s devoted his life to studying the puzzles hidden within this world’s digital confines, puzzles that are based on their creator’s obsession with the pop culture of decades past and that promise massive power and fortune to whoever can unlock them. When Wade stumbles upon the first clue, he finds himself beset by players willing to kill to take this ultimate prize. The race is on, and if Wade’s going to survive, he’ll have to win—and confront the real world he’s always been so desperate to escape.

So I hadn’t really intended on reading this book this month, but I watched the trailer for the movie and, intrigued, picked it up and read the prologue to see what it was about. And somehow I could not stop thinking about it. END_OF_DOCUMENT_TOKEN_TO_BE_REPLACED

So, remember how I keep talking about how awful I am at finishing series?

Well, I think I just found the perfect challenge for me to join!

The 2018 Finishing Series Reading Challenge is exactly as it says it is: a year-long challenge dedicated to finishing series that you have started prior to the start of 2018.

I am going to keep a list here of all the books in the series I need to read, and come back once I finish them an mark them as read.  The order of the list is does not reflect the order in which I plan to read them, but rather just the order in which I thought of them as I wrote them down.  I will also be adding them to a Goodreads list, but more for me really.

So far in total I have 12 series listed that I want to maybe finish in 2018, but since I don’t think I will be able to do all of those, I think for this challenge I am going to aim to be a B-List Series Finisher (Complete 5-8 Series).  Of the ones below, the ones I really hope to finish/catch up on are The Chronicles of St. Mary’s, The Illuminae_Files, The Nevernight Chronicles, Creatures of Light, Monsters of Verity, The Diviners, and Charlotte Holmes.

*Edit: I FORGOT THE DARK ARTIFICES!!  Added below.

END_OF_DOCUMENT_TOKEN_TO_BE_REPLACED

The City of Brass (The Daevabad Trilogy #1), by S. A. Chakraborty

Nahri has never believed in magic. Certainly, she has power; on the streets of 18th century Cairo, she’s a con woman of unsurpassed talent. But she knows better than anyone that the trade she uses to get by—palm readings, zars, healings—are all tricks, sleights of hand, learned skills; a means to the delightful end of swindling Ottoman nobles.

But when Nahri accidentally summons an equally sly, darkly mysterious djinn warrior to her side during one of her cons, she’s forced to accept that the magical world she thought only existed in childhood stories is real. For the warrior tells her a new tale: across hot, windswept sands teeming with creatures of fire, and rivers where the mythical marid sleep; past ruins of once-magnificent human metropolises, and mountains where the circling hawks are not what they seem, lies Daevabad, the legendary city of brass?a city to which Nahri is irrevocably bound.

In that city, behind gilded brass walls laced with enchantments, behind the six gates of the six djinn tribes, old resentments are simmering. And when Nahri decides to enter this world, she learns that true power is fierce and brutal. That magic cannot shield her from the dangerous web of court politics. That even the cleverest of schemes can have deadly consequences.

After all, there is a reason they say be careful what you wish for . . .

This was a book that took me some time to get through (so much, in fact, that I didn’t finish it until almost a month after its release). I wish I could say that it was because of outside factors like work, but it is sadly not so. This book was just long. And I don’t know if it’s just because I had to take a lot of time understanding the world-building, or if I just didn’t feel extremely compelled to constantly be reading it. Either way, despite that, I came away from it feeling mostly enchanted and eager for the next installment. END_OF_DOCUMENT_TOKEN_TO_BE_REPLACED