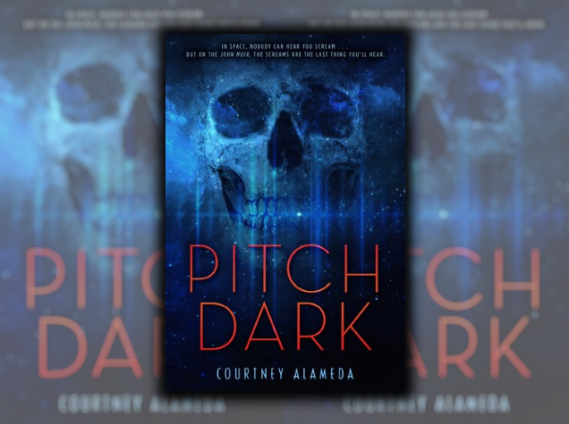 Tuck has been in stasis on the USS John Muir, a ship that houses Earth’s most valued artifacts—its natural resources. Parks and mountains are preserved in space.

Laura belongs to a shipraiding family, who are funded by a group used to getting what they want. And they want what’s on the Muir.

Tuck and Laura didn’t bargain on working together, or battling mutant aliens who use sound to kill. But their plan is the only hope for their crews, their families, and themselves.

In space, nobody can hear you scream . . . but on the John Muir, the screams are the last thing you’ll hear.

In all honesty, when I first looked at the cover of this book and started reading the description, I thought it was going to be cheesy. But then by the end of the summary I felt an almighty need to read it. I mean, the idea of monsters that use sound to kill?? How cool is that! Honestly the only disappointment for me was that it turned out it wasn’t actually aliens that were the monsters….

The books had a lot of ups and a few downs, but luckily mostly ups. The strongest part of the book is definitely the two main characters, Laura and Tuck. Alameda really captured the teenage voice well when it came to Tuck – I had no doubt believing he was an adolescent – and despite the fact that there were times he came off as the “broody YA type,” he is also snarky and has depths to him that clearly stem from his experiences on the John Muir and his relationship with his mother. I did think the constant references to old movies and stuff made by Tuck got to be a little much after a while. He was almost like a walking Tumblr account, and I think my eyes rolled out of my sockets at some of the lines he gave. I get it, it makes sense, he’s a teenager, but still, I cringed.

Then there is Laura, who is Latina, and is strong, graceful and determined. Her personality is strongly built on the care she has for her family and her desires to help them and humanity in any way. Alameda did a wonderful job of portraying the discrimination against Mexicans and other people of Latin descent that is prevalent today and showing how some people refuse to overcome their prejudices even in the future. As such, the characters who are the antagonists of the story (both of whom are white and privileged), do come off a little one-dimensional in their evilness. While part of me wishes there was something more to understand them by other than their disgustingly single-minded agenda, I also completely understand why Alameda made them so unabashedly evil with next-to-no qualities to empathize with and thus don’t feel like it is a major detriment to them as characters. There were also a lot of side characters that had significant relationships with Laura or Tuck respectively, but whose presence was a little lacking. I wish there had been more interactions with them, or even a better showing of some of the relationships because they just kind of fell by the wayside a bit here and there.

I will say the semi-insta-love moment upon Laura and Tuck’s first meeting had me going “oh no” because if there is one thing I hate…but luckily that was not the case. Somehow, despite the short amount of time they knew each other, Tuck and Laura’s moments together really helped to solidify the progression of their relationship, and by the end I was completely onboard with them getting together. The chemistry between them was excellent and strong, did not feel cheesy once, and felt so natural despite the circumstances of their situation.

The plot was fast-paced and constantly moving, with so much action and intrigue it felt like I could barely catch my breath. I did feel that there were some plot-hole issues here and there, questions I had that I never felt were answered. [SPOILER]The mourners are supposedly humans that went through some sort of evolution during stasis, and yet there was never any question about a catalyst for this. What caused them to mutate? There was only one factor mentioned, but to me it sounded like there needed to be something else that would have triggered a reaction. And about halfway through the book an additional evolution became apparent – the “fester” that was basically like a giant fungus growing all over the ship, but which never seemed to have a source or cause for its existence (but which the griefers supposedly “grew” from? Even though I thought they were just a different sort of mourner?). [END SPOILER] A lot of the beginning of the book, while filled with action and drew me right into the story, was also chockful of descriptions and info-dumps that didn’t entirely paint a clear picture of things for me. I furthermore thought there were some things that were included just for the suspense of it all, because a lot of these high-tension moments revolved around failsafes that would be completely stupid to have in a place such as outerspace. In my opinion at least.

This was definitely a fun book to read, with its constant action and edge-of-you-seat and hold-your-breath moments. I thought Tuck and Laura were written excellently, and despite the few plot-holes, overall it was a pretty great story with a lot of heart behind it.