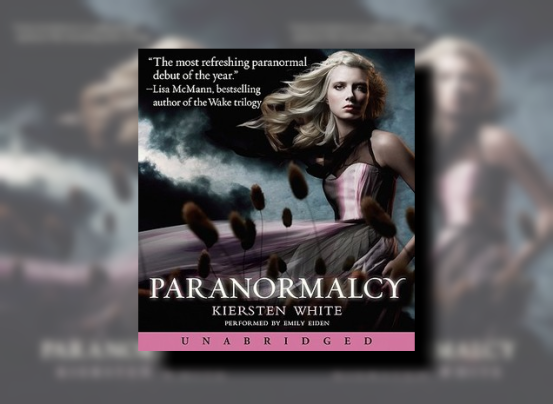 Evie’s always thought of herself as a normal teenager, even though she works for the International Paranormal Containment Agency, her ex-boyfriend is a faerie, she’s falling for a shape-shifter, and she’s the only person who can see through supernatural glamours.

She’s also about to find out that she may be at the center of a dark faerie prophecy promising destruction to all paranormal creatures.

So much for normal.

I listened to this as an audiobook and fell in love with Evie almost immediately. Probably right around the time she kicked a gremlin into someone’s arms and shouted “Goal!”

Evie is definitely not your typical YA heroine and I LOVE her for it. She is almost the opposite. Brought up in a life of working for an undercover agency that works to contain paranormals, she isn’t one of those “not like other girls” girls, she WANTS to be like those other girls. She is sweet and bubbly, loves the color pink, obsesses over a teen drama show, and dreams of a normal life. Yeah she is a little rash at times and makes mistakes but they are flaws that make her who she is. But I just loved her and ached for her when she felt lonely and adored how much she cared for those who were close to her.

I liked the plotline a lot. It definitely pulled me along and had me eager for more as I struggled to understand the mysteries that Evie was trying to decipher, and in some cases, ignore because she didn’t want to be involved anymore (and I totally feel that girl). There was suspense and romance, with some great moments of action that had me on the edge of my seat. It was just such a fun story to which to listen.

I really enjoyed the romance aspect because I definitely thought the chemistry between Lend and Evie was perfect and adorable. I did have to roll my eyes when she dropped the “L” word though cause really Evie? Otherwise, though, I thought they were perfect together.

Definitely looking forward to the next one!