For Britain, conditions are grim: Napoleon’s resurgent forces have breached the Channel and successfully invaded English soil. Napoleon’s prime objective is the occupation of London. Unfortunately, the dragon Temeraire has been removed from military service–and his captain, Will Laurence, has been condemned to death for treason. Separated by their own government and threatened at every turn by Napoleon’s forces, Laurence and Temeraire must struggle to find each other amid the turmoil of war. If only they can be reunited, master and dragon might rally Britain’s scattered resistance forces and take the fight to the enemy as never before–for king and country, and for their own liberty.

END_OF_DOCUMENT_TOKEN_TO_BE_REPLACED 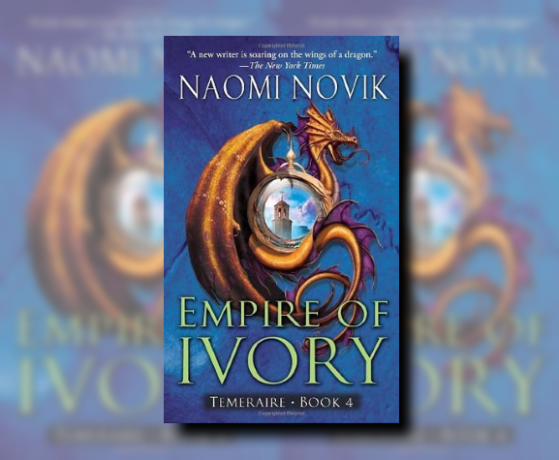 Tragedy has struck His Majesty’s Aerial Corps, whose magnificent fleet of fighting dragons and their human captains valiantly defend England’s shores against the encroaching armies of Napoleon Bonaparte. An epidemic of unknown origin and no known cure is decimating the noble dragons’ ranks–forcing the hopelessly stricken into quarantine. Now only Temeraire and a pack of newly recruited dragons remain uninfected–and stand as the only means of an airborne defense against France’s ever bolder sorties.

Bonaparte’s dragons are already harrowing Britain’s ships at sea. Only one recourse remains: Temeraire and his captain, Will Laurence, must take wing to Africa, whose shores may hold the cure to the mysterious and deadly contagion. On this mission there is no time to waste, and no telling what lies in store beyond the horizon or for those left behind to wait, hope, and hold the line.

After their fateful adventure in China, Captain Will Laurence of His Majesty’s Aerial Corps and his extraordinary dragon, Temeraire, are waylaid by a mysterious envoy bearing urgent new orders from Britain. Three valuable dragon eggs have been purchased from the Ottoman Empire, and Laurence and Temeraire must detour to Istanbul to escort the precious cargo back to England. Time is of the essence if the eggs are to be borne home before hatching. Yet disaster threatens the mission at every turn thanks to the diabolical machinations of the Chinese dragon Lien, who blames Temeraire for her master’s death and vows to ally herself with Napoleon and take vengeance.

Once again, I am reminded how much I love Naomi Novik’s writing. I have fallen so much in love with these characters, flaws and all, that I am forever in their grip.  END_OF_DOCUMENT_TOKEN_TO_BE_REPLACED 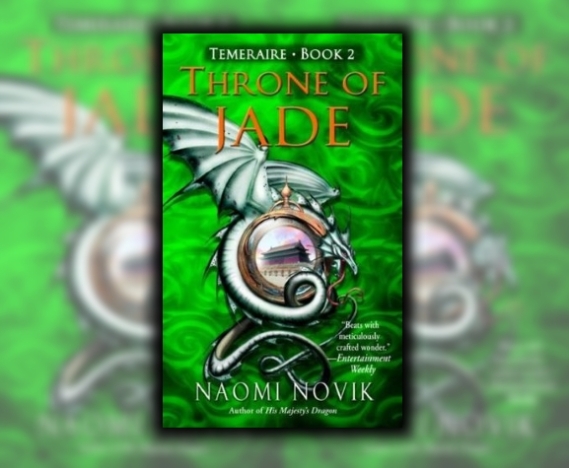 When Britain intercepted a French ship and its precious cargo–an unhatched dragon’s egg–Capt. Will Laurence of HMS Reliant unexpectedly became master and commander of the noble dragon he named Temeraire. As new recruits in Britain’s Aerial Corps, man and dragon soon proved their mettle in daring combat against Bonaparte’s invading forces.

Now China has discovered that its rare gift, intended for Napoleon, has fallen into British hands–and an angry Chinese delegation vows to reclaim the remarkable beast. But Laurence refuses to cooperate. Facing the gallows for his defiance, Laurence has no choice but to accompany Temeraire back to the Far East–a long voyage fraught with peril, intrigue, and the untold terrors of the deep. Yet once the pair reaches the court of the Chinese emperor, even more shocking discoveries and darker dangers await.

I really enjoyed this one, possibly a bit more than the first. While the first one was a great introduction to all of the characters and the world, this one had so much more intrigue and adventure to it. END_OF_DOCUMENT_TOKEN_TO_BE_REPLACED

Aerial combat brings a thrilling new dimension to the Napoleonic Wars as valiant warriors ride mighty fighting dragons, bred for size or speed. When HMS Reliant captures a French frigate and seizes the precious cargo, an unhatched dragon egg, fate sweeps Captain Will Laurence from his seafaring life into an uncertain future – and an unexpected kinship with a most extraordinary creature. Thrust into the rarified world of the Aerial Corps as master of the dragon Temeraire, he will face a crash course in the daring tactics of airborne battle. For as France’s own dragon-borne forces rally to breach British soil in Bonaparte’s boldest gambit, Laurence and Temeraire must soar into their own baptism of fire.

Despite this book being a little slow in terms of action, I found myself quite enjoying it. END_OF_DOCUMENT_TOKEN_TO_BE_REPLACED

What do you mean I'm stuck with ALLL these humans "indefinitely"? How am I supposed to get any napping done?? #quarantinecats #kitten #quarantinekitty
Tonight's quarantine activity is watching Harper stalk a stink bug in the ceiling light fixture. #quarantinekitty #quarantinecats #kitten
Harper is sitting by the front door, making sure we practice our social distancing. #quarantinekitty #quarantinecats #kitten
#kitten
Speak of the devil and you shall receive! I was just wondering whatever happened to the copy of Darkdawn I ordered from Goldsboro, and it arrived today! And now my collection is complete!! . . . #darkdawn #thenevernightchronicle #jaykristoff #bookmail
My @waterstones copy of Ninth House by @lbardugo arrived!!! I can't believe how fast that was considering it shipped on Monday from the UK. Usually it takes longer with international, but here it is!! And it is so pretty!!!! Look at the spine under the jacket!!! Can't wait to start reading! . . . #ninthhouse #waterstones #leighbardugo #bookstagram